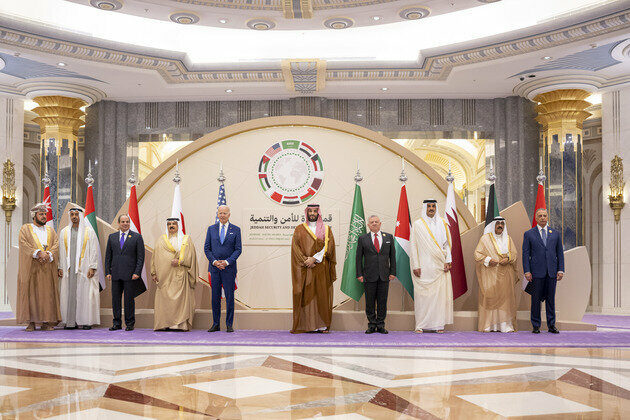 The statement outlined the agreement between GCC Leaders and the US on enhancing defence, security and intelligence cooperation, as well as supporting all diplomatic efforts to reduce regional tensions.

The joint statement issued today is as follows:

"At the invitation of the Custodian of the Two Holy Mosques, King Salman bin Abdulaziz Al Saud of Saudi Arabia, the leaders of the Gulf Cooperation Council (GCC) Member States and the United States met today in Jeddah, Saudi Arabia. The leaders noted the previous U.S.-GCC Summits held on 14th May, 2015 in Camp David, and on 21st April, 2016 and 21st May, 2017 in Riyadh. The leaders reaffirmed the strategic importance of the historic ties between their countries, and their shared commitment to build upon the achievements of previous summits to strengthen cooperation, coordination, and consultation in all fields.

The leaders affirmed their commitment to joint cooperation to bolster global economic recovery efforts, address the economic repercussions caused by the pandemic and the war in Ukraine, ensure the resiliency of supply chains and the security of food and energy supplies, develop clean energy sources and technologies, and assist countries in need by helping address their humanitarian and relief needs.

The US welcomed the Arab Coordination Group (ACG) decision to provide a minimum of US$10 billion USD in response to food security challenges regionally and internationally. The leaders also welcomed the US' announcement of US$1 billion in near- and long-term food security assistance for the Middle East and North Africa (MENA) region.

The leaders recognised the ongoing efforts of OPEC+ towards stabilising the global oil market in the interests of consumers, producers, and supporting economic growth, and welcomed the recent announcement by OPEC+ members to increase supply over the course of July and August, and commended the Kingdom of Saudi Arabia's leading role in achieving consensus between the members of OPEC+.

President Biden commended the decision of some GCC countries plans' to invest US$3 billion in infrastructure projects in low- and middle-income countries, through investing in projects that advance climate and energy security and digital connectivity, and that strengthen and diversity global supply chains.

US President expressed appreciation for the GCC countries' pledge to provide US$100 million for the East Jerusalem Hospital Network, which provides life-saving healthcare to Palestinians in the West Bank, Gaza, and East Jerusalem.

The leaders affirmed their joint commitment to preserve regional security and stability, support diplomacy with the aim of regional de-escalation, deepen their region-wide defence, security, and intelligence cooperation, and ensure the freedom and security of waterways. In this context, the leaders of the GCC member states welcomed President Biden's affirmation of the US' commitment to its strategic partnership with GCC member states, and that it stands ready to work jointly with its partners in the GCC to deter and confront all external threats to their security, as well as against threats to vital waterways, especially the Strait of Hormuz and the Bab Al-Mandab.

The leaders affirmed their support for ensuring that the Arab Gulf region is free from all weapons of mass destruction, underscoring the centrality of diplomatic efforts to prevent Iran from developing a nuclear weapon, and for confronting terrorism and all activities that threatens security and stability.

The leaders commended the ongoing cooperation between the GCC member states and the US to promote the security and stability of the region and its waterways. They affirmed their commitment to cooperate and coordinate between their countries to enhance their defence and joint deterrence capabilities against the increasing threat posed by the proliferation of unmanned aerial systems and cruise missiles, as well as against the arming of terrorist militias and armed groups, including in violation of UN Security Council Resolutions.

The leaders discussed various ways to enhance their joint cooperation aimed at strengthening deterrence and the defence capabilities of GCC member states, as well as enhanced integration and interoperability in their air and missile defences and maritime security capabilities, and early warning systems and information sharing.

The leaders welcomed the establishment of Combined Task Force 153 and Task Force 59, which will enhance joint defence coordination between the GCC member states and the U.S. Central Command, to better monitor maritime threats and improve naval defences by utilising the latest technologies and systems.

The leaders affirmed their keenness to continue to hold the U.S.-GCC Summit annually."